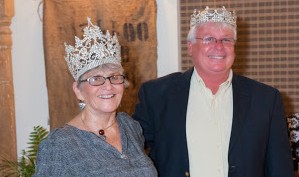 On Monday, November 17, 2014 CASA of Hancock County held a reveal party and invited its volunteers, supporters and community stakeholders at The West End Restaurant to announce the 2015 Mardi Gras Gala King and Queen. Annually, two members of the community are nominated by the organization based on their volunteer efforts to improve the lives of the abused and neglected children of Hancock County. The 2015 Queen of the Krewe of CASA is Ms. Camille Tate and her King is Mr. Dave Mayley. Both are residents of Bay St. Louis and have long standing histories of supporting the CASA organization. Dave and Camille will reign as King and Queen of CASA’s 4th Annual Mardi Gras Gala to be held on Saturday, January 17, 2015 at the Bay St. Louis Community Center.

Tickets to the gala can be purchased at the CASA office at 412 Highway 90, Suite 3, Bay St. Louis.